(Picture Gallery in the bottom of this page!) 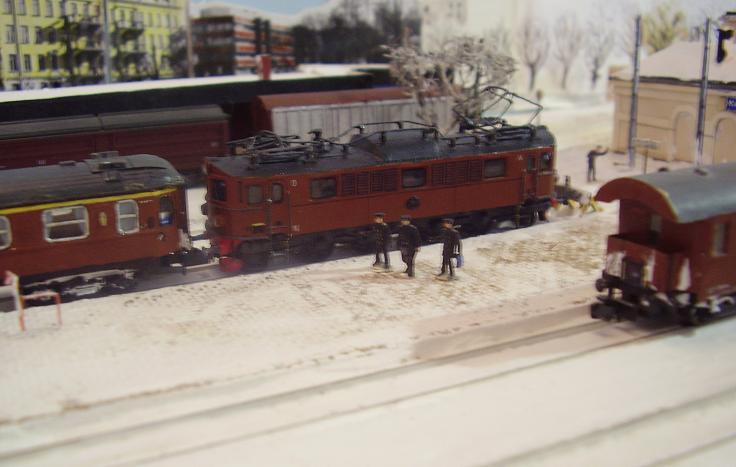 After completing our military services in Karlskrona, Blekinge (in southern of Sweden) in the rough winters 1978 and 1981
respectively, me and my brother Frank decided to build a model railway in N-scale (1:160).
The pattern was the line (Alvesta-) Emmaboda- Karlskrona C in winter.

The model was build up in the basement of our parent´s home in Tumba, south of Stockholm. 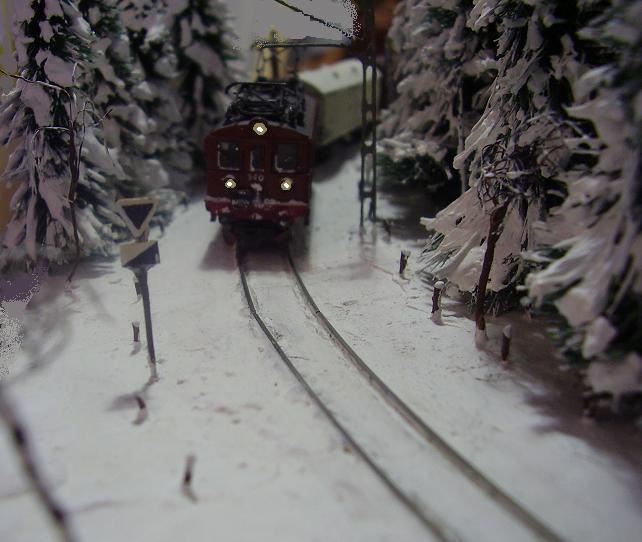 I´ve got the inspiration on a january evening as a homesick conscript on the Karlskrona station, in heavy snowstorm.
From the end of the platform I could hardly see the snow-covered track disappear in the darkness, and the desolation.
An obvious link to my hometown Stockholm far away northbound! 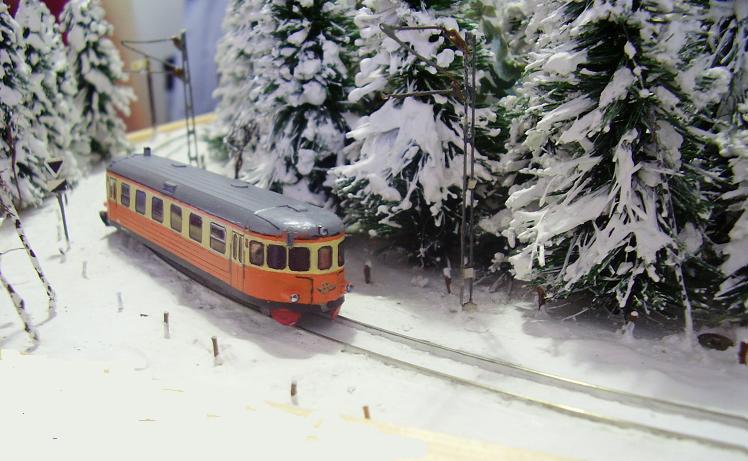 To travel the Karlskrona-Emmaboda line felt endless, I remember. The time of journey is still today about 45 min, with just a
pair of short stops between.
To get the feeling of real distance of the lines, the choose of N-scale was a matter of course. The landscape ought to
be characterized by the desolated spruce-forests of Småland - as you feel it trough the train window - with long
distances between the very swedish red cottages! 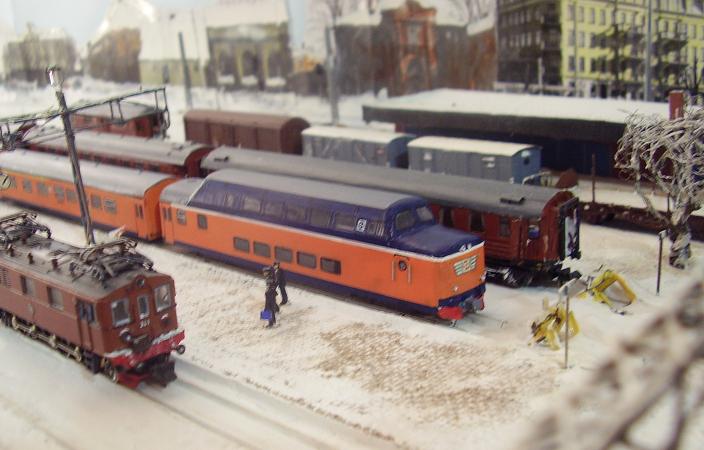 The chosen epoch for the model railway was the 70´s and early 80´s, with the typical rail vehicles at this time by SJ.
Autumn 1978 we started the works, and we made several research-travels down to Småland/Blekinge, even after we were
demobbed from the military. 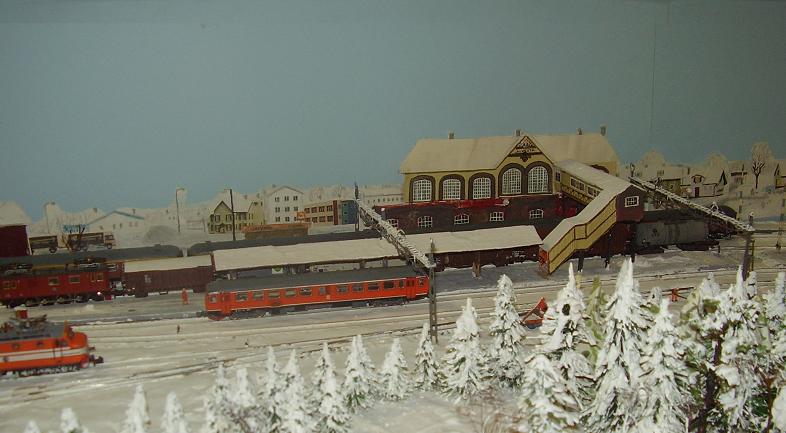 Brother Frank was responsable for all the technic "beneath" the construction, for example the electronics with the skein
of cables. I was standing for the scratchbuild locos and coaches, details and the snowy landscape.

The layout was (in original) extending along three walls, with a loop at each end. Karlskrona C was (like in reality) a terminus station,
placed at the end of a single-track line.
There is once more station on the model: Alvesta. Here you also can find a small marshalling yard, but beside of that the
layout mostly consists of lines with dense forests! 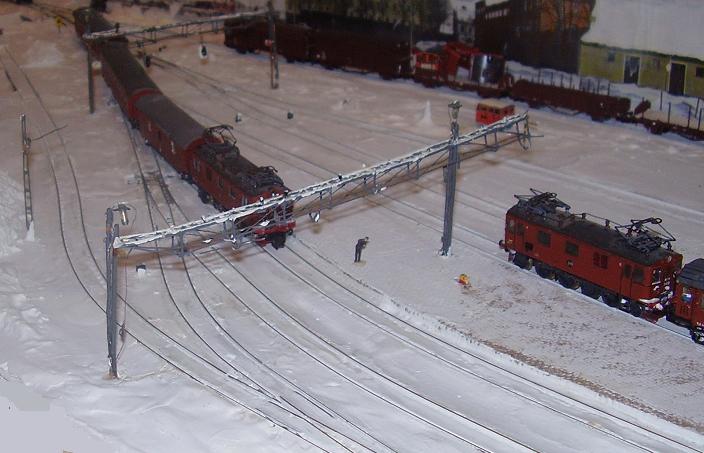 All the snow consists of plaster, applied over the landscape and the tracks. In the points, this - like in real life -
led to problems. In several points we changed the cracked plaster for peaces of white cardboard instead, around the rails. 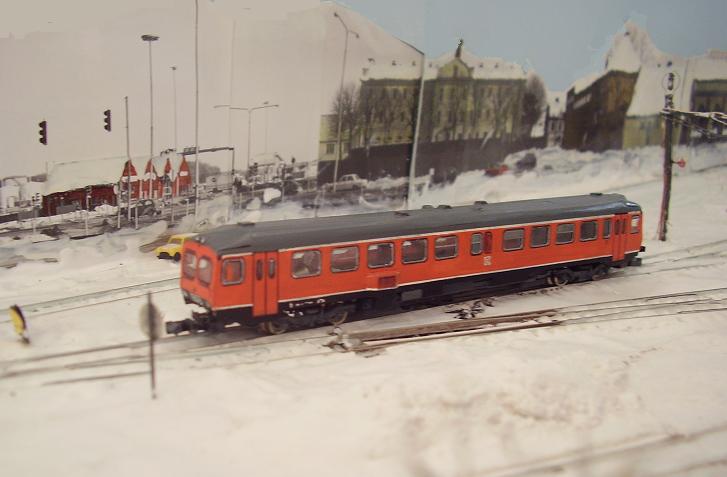 When Frank and I moved out from our parent´s house in the middle 80´s, the model stod unused in the same basement for
years. But Frank can take the credit for that it was still in working order all time.

In 2005 the whole layout was moved from our former home in Stockholm to Nässjö railway museum in Småland. By freight train, of course!
In Nässjö, the model was shown up for the public for six years. March 5, 2011, it unfortunately was taken down. Again...

After the parts collecting dust, in a garret in the museum for three years, we finally got the go-ahead by Modelljärnvägens Hus in Alunda
(east of Uppsala)
The layout is donated there since March 2014 - and with scarce resources, the Winter Railway has slowly been rebuilt.
Many changes had to be made on the layout to be able to run the trains in public. E.g. a. hidden depots with automatically controlled trains.

In 2020, the layout was finally rebuilt, and part of the museum´s exhibition! (See photos of it at the bottom)

Here is a picture cavalcade:

Some pictures from the rebuilt layout, permanantly exhibited at Modelljärnvägens Hus: